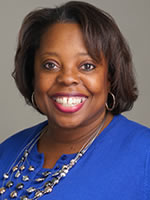 Alicia Andrews is serving her second term as Chair of the Oklahoma Democratic Party. Most recently, she served one term as the Secretary of the Tulsa County Democratic Party. As a staffer on the 2018 coordinated campaign, she was privy to the party structure on a statewide level and was compelled to run.

Alicia has long been an advocate for causes she believes in. She volunteered for Big Brothers and Big Sisters of Green Country and canvassed for several campaigns.

Alicia is currently a Realtor with a corporate background in strategic planning. Alicia was raised in the Oklahoma City metro area, graduated from high school in Tulsa, and ultimately graduated from the University of Oklahoma with a BA in Psychology. In addition to her corporate work, Alicia ran a consulting firm specializing in writing business plans for bank financing for startups throughout Oklahoma.

Her focus is on reinforcing the infrastructure of the ODP through programs and systems while securing our financial position. This is how we get more Democrats elected. Eric Proctor was raised by two Oklahoma public school educators who both had second jobs on the weekends. They instilled the values of empathy, hard work, Hope, mercy, and grace. It is from this foundation that he dedicated his life toward ensuring everyone gets a shot at the American Dream.

He followed in his parents’ footsteps and became a public school teacher, teaching at-risk students at an alternative high school. In 2005 at the age of 22, he began his campaign for the state legislature against an entrenched ten-year Republican opponent. His campaign was outspent many times over but they were not outworked. Eric knocked on over 14,000 doors and won that election by 217 votes. He was re-elected five times and championed the issues of education funding, child hunger, holding utility companies accountable, veterans and children of fallen veterans, medical marijuana, expanding Medicare, autism insurance coverage, equal pay, living wages, and workers’ rights. Rachael Hunsucker from Coweta Oklahoma is serving her third term as ODP Treasurer. She is an accountant for an electronics manufacturing company and a former Executive Director of Operations for a Tulsa non-profit organization. She’s a community activist having served or volunteered her time and resources to organizations like the Child Abuse Network as a board member, the Junior League-Tulsa, which she has volunteered with since 1997 and is a former President. Rachael has also given of her time to the ODP serving on the First Congressional District Resolutions and ODP Finance Committees and representing Wagoner County as her Precinct Chair.

Rachael earned her degree in accounting from Oklahoma State University and has worked for various Tulsa companies in finance and accounting before serving as the Treasurer for the ODP. Her work for the ODP is centered on strengthening the Party’s financial processes and helping to build a permanent, long-lasting financial infrastructure. Nana Dankwa was born and raised in Oklahoma City. He attended K-12 in the Putnam City School district. After high school, he worked at Dean McGee Eye Institute as a Surgical Technologist for 9 years. After earning his bachelor’s degree in Political Science at UCO, Nana pursued his dream of becoming an attorney. He was admitted to Oklahoma City University School of Law in 2014 and graduated with his Juris Doctorate in 2017. He also obtained his M.B.A. a year later from the Oklahoma City University’s Meinders School of Business.

Nana is a husband, and a father of two raising his family on the Northwest side of Oklahoma City. He is a licensed attorney working in regulatory compliance for financial institutions, including Midfirst Bank and Citigroup.